BY: ROLY L. HALES DATE: DECEMBER 9, 2016
Originally published on The ECOreport.
Porterville, California, is about to make transportation history. The little Californian city only receives an average of 13 inches of rain a year, which makes it particularly vulnerable to atmospheric inversion, which holds in the exhausts from vehicles, agriculture, and other sources. Thanks to a determined city hall, the number of Stage 1 smog alerts declined from over 100 per year, in the 1970s, to almost zero. On December 7, the California Air Resources Board awarded $9.5-million to replace its entire bus fleet. By January, 2018, Porterville should have North America’s first 100% electric municipal bus system.

“There are other cities moving towards 100% battery electric, like Lancaster and Palmdale, but Porterville will beat them,” said Brendan Riley, President of the Vancouver-based electric vehicle company that will install the system, in an interview with me for The ECOreport. GreenPower Motor Company Inc. (TSXV: GPV) (OTCQB: GPVRF) is a Canadian company trading on the Toronto and US OTC stock markets.

Last October, GreenPower supplied the Greater Victoria Harbour Authority with North America’s first fully electric double-decker bus. It was also the company’s first delivery, an “EV550” that can travel up to 300 miles on a single charge (mpc). Victoria Buzz reported:

“The 45-foot-long EV550 has a capacity of 99 seats including 65 on the upper floor, plus standing room. Each seat comes with a USB charging port. The bus is fully accessible with low-floor design, kneeling capabilities, wheelchair lift and configuration with two spots for wheelchairs or mobility aids.” “The best way to really see a city, and its transit, is to get on the top deck of a double decker. Passengers love it. I’ve always loved it. Even as a child, when I went to London my favorite thing was to get upstairs on a double decker. That was the product that brought me over the GreenPower,” said Riley.

He joined the company less than two weeks after the launch in Victoria.

Prior to that, he was the North American Vice President of Fleet Sales for BYD Motors.

“I was the first American employee of BYD motors, basically their start up guy. I started up the entire program. Even deciding what products to bring to market; hiring people and building the team; expanding into Canada and Mexico,” said Riley. 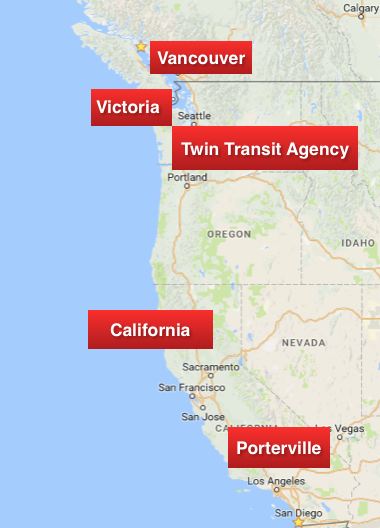 He is also a Southern California resident, which might explain how GreenPower received Letters of Intent for 25 GreenPower all-electric school buses from 9 different school districts in the State of California.

“GreenPower has the first purpose built and designed school buses. This is not the standard body-on-chasis, like taking a truck chassis and throwing a body on it, that’s used ubiquitously in the United States and Canada. GreenPower’s school bus are not limited to putting batteries between frame rails – because there aren’t any frame rails. I have a full chassis on the bottom that is strong enough that if I get into a side impact, my batteries are within the frame. It has a lot of flexibility: allowing us to put the weight where we want it, to go with bigger or smaller batteries and put the motor where we want. This is a full monocoque designed school bus, a truly game changing product,” said Riley.

He added that, at the time of this writing, GreenPower has built a total of five buses.

“They are the finest battery electric products, bar none, that I have experienced and I am familiar with all the products being sold in North America.”

In September, GreenPower purchased a 9.3 acre property in Porterville for an assembly plant. It plans to power it with renewable energy, “quite possibly even off the grid.” 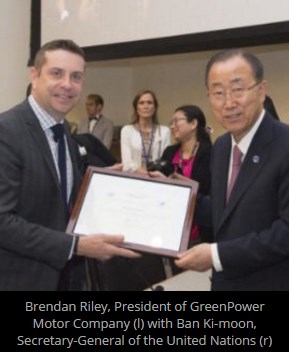 “We’re working out those calculations right now, to see what we can do,” said Riley.

“We are thrilled by the commitment by GreenPower Motor Company to establish its manufacturing facility in Porterville and the hundreds of local jobs it will generate, in addition to the economic and technological benefit to the greater San Joaquin Valley,” said Mayor Milt Stowe.

“The real secret to the GreenPower EV350 is its clean-sheet, built-from-the-ground-up design that eschews conventional bus chassis in favor of a purpose-built EV setup. Like the Tesla Model S, the batteries have been placed low in the floor to give it a low center of gravity. The EV350 has also used lightweight materials like carbon fiber and aluminum to keep it as light as possible for such a large electric vehicle, though it still comes in at just over 31,000 pounds, making the 5,000 pound Model S seem svelte in comparison.”

“The EV350 an be shortened or lengthened very easily, you just take sections out or add them. It can be as small as 30 feet in length and as long as 45 feet. That’s not new in the bus world, but this is a clean sheet EV design. Everything was designed for electric propulsion and battery placement,” said Riley.

It will also install a charging infrastructure that includes 11 charging stations.